This wiki is entirely built by players.

As the next round of Legion of Frostborne is about to enter its war phase, another Infinity Kingdom update is coming amidst the ice and snow. All our Lords have displayed great valor and wisdom in the Frozen Realm. Version 1.8 brings the official start of the Season system, applying to all servers. As the seasons progress, new level limits and content will be unlocked. Continue reading for all the details of this update, and prepare to embrace a new and expansive future.

All servers will officially start using the Season system. The system will assign each server to a season based on its Chronicle progress and Legion of Frostborne performance. As each server progresses through the seasons, the maximum level (of buildings, Immortals, troops, dragons, and more) will increase, and new Academy Technology and Lord Talent branches will be unlocked.

2. Season 1: Servers which have completed Chronicle event 21 “Royal Ambition” but have not completed the first round of Legion of Frostborne will be in Season 1.

3. Season 2: Servers which have completed the first round but not the second round of Legion of Frostborne will be in Season 2.

4. Season 3: Servers which have completed the second round but not the third round of Legion of Frostborne will be in Season 3.

1. Activation – Alliance tactics must be activated before they can be used. To activate a tactic, your Alliance must first earn Tactic Points.

1. Military Tactics – Military tactics provide attack boosts that give Alliance members an offensive advantage in battle. The best defense is a strong offense.

2. Taking Effect – Passive tactics take effect after being activated. Active tactics must be used by the Alliance Leader (R6) or Officers (R5) before they can take effect.

3. Range – Tactic effects apply to all Alliance members whose territory is in the Frozen Realm.

1. Setting Tactics – To adapt to the ever-changing battlefield, Alliance management must initially set 3 different tactic combinations, then switch between these combinations in response to the current situation.

2. Switching Tactics – Switching combinations does not consume resources, but after switching, there is a waiting period before you can switch tactics again.

3. Resetting Tactics – Activated tactic combinations can be reset, upon which all Tactic Points will be refunded, so you can use them to activate other tactics.

1. Pre-competition period – The Illusion Battlefield special topic will appear in Daily Talks 48 hours before registration for the competition begins.

The system will recommend matches in the current round of the Illusion Battlefield based on Alliances’ winning odds, winning streaks, and other parameters.

You will be able to pre-arrange different troop formations that you can switch between for different combat situations.

In Version 1.8, we have added features to help new Lords join Alliances and learn the basics of the game. We have also made some optimizations to provide a smoother game experience.

Updated the Alliance recommendation system to recommend suitable Alliances based on Power and language.

Added translation and translation review features to help you read Alliance declarations written in other languages.

Added the “Immortal Skill Effect Details” chapter to the Development part of the guide. This chapter categorizes and gives detailed explanations of Immortal skills, their effects, and status effects.

Log in for 300 days total or 200 days in a row to receive a corresponding commemorative Avatar Frame. Lords who have already reached the requirements will be able to claim their rewards after the update is complete.

Following the end of the trial season, our developers have listened closely to your feedback, and made comprehensive optimizations to the gameplay, balance, and visual effects of Legion of Frostborne. Legion of Frostborne now has more gentle survival requirements, tighter cooperative gameplay, and more room for strategizing. We cordially invite you to the Frozen Realm once more to experience the newly optimized content, and share your feedback with us. With your guidance, we will continue to improve Legion of Frostborne, as well as develop new exciting game modes in the future!

1. When Attacking: At least one grid occupied by the target city or checkpoint must be within the range of the Thermal Towers of your Alliance or friendly Alliances. Otherwise, you cannot dispatch troops to attack the city/checkpoint.

Added visual effects from when Gnome cities in the Frozen Realm have been damaged or are being repaired, so the battle situation is more clear.

All servers participating in the Legion of Frostborne will be allocated a color. Your Territory Decoration, marching troops, marching lines, and territory markers on the mini-map will be the same color as your server. This makes it easier to read the battle situation.

Friendly and enemy Alliances will be marked more clearly, so you can easily tell friends from foes.

Optimized rules for calculating Thermal Tower production/building objectives in the Legion Chronicle. Thermal Towers produced and built before the relevant Chronicle Chapter starts will also be calculated towards fulfilling the objective.

After completing a Thermal Tower’s construction, the construction troops will automatically return.

Resources returned for dismissing troops will be obtained as non-secure resources. 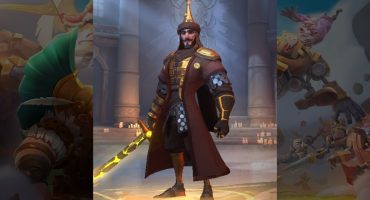 Muhammad II aka Mehmet II Infinity Kingdom have a ne...

Do you wonder what to expect from SvS reward boxes? Her...